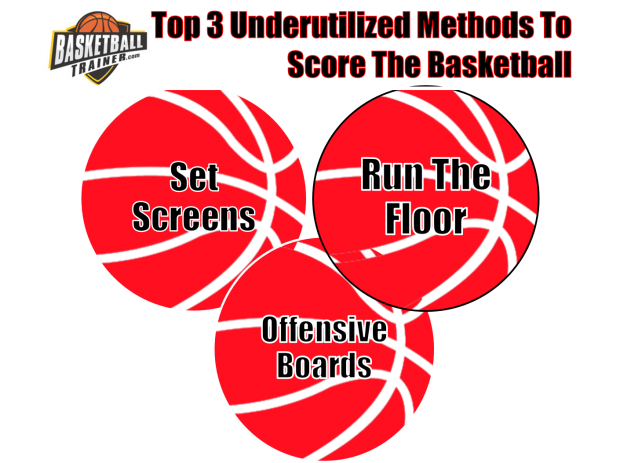 3 Underutilized Ways to Score the Basketball

Everyone loves to score. It’s the most fun part of the game for many. And since the team with the most points wins 100% of the time, scoring is at the core of what competitive basketball is. When players score points, they feel good about themselves because they are helping their team win. And frankly, it just feels good to put the ball in the basket. While a lot of us would love to be 20 point per game scorers, scoring is not always easy. That being the case, players need to learn how to score and help their teams in various ways. Here are 3 underrated ways to score the basketball.

When you think about screening, you might naturally think about one player sacrificing his body to help his teammate get open. But smart players know that screening does more than that, and that setting a screen is a great way for the player who screens to get open. The reason for this is that when you set a screen, the defense has to figure out how they’re going to defend the two offensive players involved. This requires good communication and quick decision making between the defenders. In many cases, the time it takes for the defense to figure out what to do is time enough for you the screener to make a strong play for the basketball. After setting an off-ball screen, the screener can make a cut to the rim for a layup or a flash to the ball for a potential catch-and-shoot or catch-and-drive opportunity. After setting an on-ball screen, the screener can make a hard roll to the rim for a finish at the basket or pop to the side for a catch-and-shoot opportunity. Smart players know that setting screens can get them easy scoring opportunities in one of these ways.

2. Beating Your Man up the Floor

This sounds simple, but do you know a lot of players who put this into practice? There are probably not as many as you would think who are doing this effectively. When you beat the player defending you down the floor on a change of possession from defense to offense, you can get easy shot or layup opportunities. This can happen off either a made or a missed basket. On a missed basket, the big man who did not secure the rebound can “run the pipe” to get up the middle of the floor quickly. If he beats his defender up the floor, he can receive a pass from a teammate for an easy layup. This is one of the reasons why big men who run the floor are so valuable. These are easy points to get, but they require hustle. Guards and wings who run the floor hard and wide during the fast break can get layup opportunities as they cut in towards the basket and look to receive a good pass from the ball handler. And outside of the fast break, the simple practice of beating the defender down the court can lead to pass-ahead wing and corner three point shots for guards and wings.

Scoring is a beautiful thing. It’s fun for individuals and it helps teams win. Put some of these habits into practice the next time you’re playing and see the positive results. If you need help developing and refining some of these skills, contact your local basketball trainer. We can help you find one that would love to help you. Have fun scoring!

There are many basketball courses for all skills, ages, budgets and goals.   We help you sift thru all the garbage to find the goals for each of … END_OF_DOCUMENT_TOKEN_TO_BE_REPLACED

The BasketballTrainer.com team is comprised of former college &  pro players and coaches focused on the needs of American youth basketball … END_OF_DOCUMENT_TOKEN_TO_BE_REPLACED