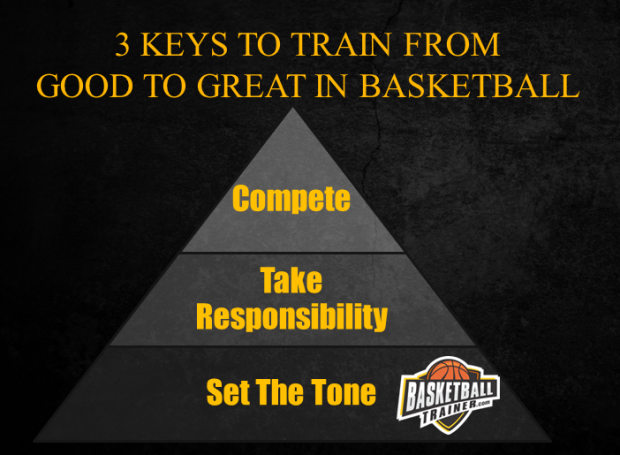 Skill development is great for youth basketball players. Developing skills is great for players of al levels in fact. But it takes more than just skills to be a great basketball player. There is an intangible component to greatness that one can’t measure in a per game average or shooting percentage. But you can still see greatness when it’s there. From over 20 years of being a diehard basketball fan in addition to being a player at various levels, there are 3 qualities I’ve noticed that most, if not all, great players have. Here are 3 major keys to being great on the basketball court. And these are things that you can implement starting today.

Great players set the tone on the basketball court. There’s a quote by author Robert T. Kiyosaki that sums up what setting the tones means: “There are those who make things happen, there are those who watch things happen and there are those who say ‘what happened’?” Great players make things happen. And they do that from the opening tip. No waiting for your teammate to give you the ‘green light’ to go block a shot on one end or attack the rim with the ball on the other. No waiting to see how good the other team is before you start to exhibit your skills. Great players go out and cause the other team to react to what they are doing, not the other way around. If you want to be a great player, you have to be a tone setter with your skills, no matter what your skills may be. You can set the tone with shot blocking, perimeter defense, running in transition, 3 point shooting, passing, driving, post scoring, etc. Whatever it is that you do, there is some way for you to set the tone for your team. And great players make sure to do it.

Great players take responsibility for their own performance and sometimes even the performance of their team. Taking responsibility for your own performance means not blaming the refs for an off night, holding yourself to a high standard, and working on your game in the offseason. Players who take responsibility allow themselves to be great because they take complete ownership of their game and performance. When you take ownership like this, you can effectively correct mistakes and work to improve your game in the areas where it is lacking. Conversely, players who don’t get what they want in the game of basketball can choose the lower road of blaming referees, politics, and teammates, etc. for their own lack of success. These players limit their ability to improve because of their “it’s not my fault” attitude. Players who take responsibility for the performance of their team don’t blame teammates after losses. Even when he or she might have played well, a great player will ask themselves “what could I have done better to help my team win?” This attitude causes great players in the NBA to raise their production in the playoffs. Instead of saying “Well, I scored about what I usually did tonight; I did my job”, a great player will say “Well, I’ve scored 30 so far but I need to do more so we can get this win.”

There are many basketball courses for all skills, ages, budgets and goals.   We help you sift thru all the garbage to find the goals for each of … END_OF_DOCUMENT_TOKEN_TO_BE_REPLACED

The BasketballTrainer.com team is comprised of former college &  pro players and coaches focused on the needs of American youth basketball … END_OF_DOCUMENT_TOKEN_TO_BE_REPLACED