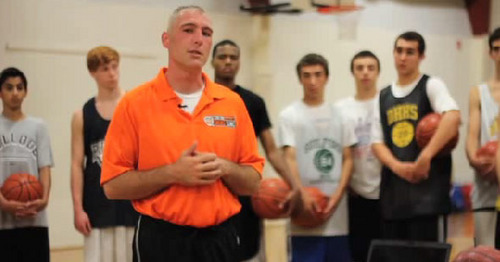 We had a chance to connect with  New Haven Basketball Trainer and Creator of Skill Development Coach, Rich Walton.  New Jersey basketball trainer Rich Stoner had shared what a  thought leader Rich Walton was and we were not disappointed after our conversations and follow up emails.

Basketball Trainer:  Rich, thanks for joining us.  Can you tell me a little about your philosophy regarding player development and basketball trainers?

Basketball is the ONLY Team sport where you can significantly improve day to day with just a ball and a hoop.  I think that we have gotten so far away from the game being about a boy or a girl and a basketball and a dream.  Everything is so overhyped, over coached, and SO UNDERTAUGHT!

This game is about 1 thing! MUSCLE MEMORY! Either you have ingrained habits with your skill set and you have a level of confidence with the ball and can read and react with the correct decision making – or you don’t!

BT: What has been your proudest moment as a basketball trainer and what is the reward that drives you daily?

RW: I think what I am most proud of is my willingness to believe in the players that I have worked with. I have trained National Player’s of the Year.  NCAA National Champions. I have trained numerous All-State Players.  Almost every player that is All-Conference in my location has trained with me.   A very low division 3 prospect that could barely handle the ball later went on to become a student manager and practice player at Louisville.  I’ve worked with under-recruited high school players that kept working throughout college and have had professional opportunities now.  But I never take credit for any player’s success.  I take pride in their accomplishments, of course.  But I feel that it is my job to tell them what to do.  To explain why they should do it.  And then demonstrate the application of why we are training the way that we are training.  But it is always on the player to take themselves as far as they want to go.   Players come to me because they love basketball, just as I did when I was a kid.  But if I can get them to love to practice it the right way, no matter what their current level of natural ability is – I think that I give them a belief in themselves that they can be great at basketball – as long as they do everything that I tell them to do. The Players that train the way that I tell them to go on to become great players.

BT: What are your thoughts on the state of skill development in American basketball?

RW:  It’s a joke!  AAU is glorified recreational basketball now.  The business side of basketball took over what was really good for the game of basketball.  Which actually works in my favor with regard to training because I am developing better, more skilled players than what any AAU Program can.  I hold a big symposium every spring to outline the affects of AAU on Player Development.  How a weekend of traveling all over the state for 48 hours and having a kid get 10 shots throughout 4 meaningless AAU Games as opposed to 500 Shots each day, or whatever skill they need to work on over the weekend – is the reason why we don’t have the level of skilled players, shooters and scorers that we could have across the board at the younger levels of developmental basketball. Unfortunately, words like fundamentals and developmental are overlooked.  I see players all the time at a young age that have their potential squandered away because they are recruited to play for some AAU program at age 12, when they don’t have the necessary skill sets to really progress to a far more developed player over the long haul.  So I have a SKILLS vs AAU Mentality.

BT: Once you share a skill with a young player, how do you help them integrate it into their game? Where are players failing in taking drills into actual game skills?

RW: People can say players don’t implement skills into games because they are not always doing the skill with a defender, or in a contextually interfered game environment.  I honestly think that has very little merit.  There are really 2 missing components when it comes to players not integrating a skill into a game:

1).  The 1st Reason is Creativity:  Players that practice the right way DON’T Just “Do Skills.”  They imagine things. Like trailing defenders, perimeter defenders, rotating defenders.  They practice to beat the Greatest Defenders!  (Practice that way… and you’ll beat any defender!)

2).  The other reason that a player doesn’t incorporate a skills into a game is simply because they haven’t practiced it enough for muscle memory.  When the ball goes up – players are going to fall back on their habits.  If they have not ingrained a muscle memory skill with confidence at game speeds in their own practice habits, why would they be able to incorporate it into a game?  That’s why you need repetition after repetition.  That’s why basketball training matters!

The tricky thing about Muscle Memory is that it comes very fast – in the matter of minutes or days… But it leaves fast, too.  So a player that thinks “I got that” when it comes to a skill doesn’t necessarily have it until they can do it again and again at a very high rate of speed without thinking.  And even then, the best players in the world make mistakes, blow layups, and turn the ball over.  But choosing the skill path as a player and practicing the correct techniques for muscle memory is the only way to be a great player.

BT: Here at BasketballTrainer.com, we always tell players we want them to work harder and smarter.  You developed a product that seems to help youngsters work smarter in the driveway and the gym while on their own.  Can you share a little?

Realizing that many of our kids wanted to do extra work outside of our training sessions mad me want to give them more guidance and inspriation when I was not available to them.  That is what SKILL DEVELOPMENT COACH is:

We put it in a video format and very easy to understand guide that helps give players the guidance they crave to become stronger players.

BT:  It looks like a great product, congrats on your work with that and thanks so much for spending some time with us here at BasketballTrainer.com

There are many basketball courses for all skills, ages, budgets and goals.   We help you sift thru all the garbage to find the goals for each of … END_OF_DOCUMENT_TOKEN_TO_BE_REPLACED

The BasketballTrainer.com team is comprised of former college &  pro players and coaches focused on the needs of American youth basketball … END_OF_DOCUMENT_TOKEN_TO_BE_REPLACED